Every so often a great read comes along that just makes you smile. According to the numerous five star reviews posted on its Amazon book page, Henry and Tom brings joy to everyone who reads it. When you download Henry and Tom you’ll treat yourself to something that will make you happy for hours for less than the price of a Grande Latte at Starbucks.

Co-author Wid Bastian was a guest last week on Will Roberts’ Weekly Telegram radio show. He explained how he met the book’s co-author, Dr. Michael Atkins, a Washington D.C. based marine biologist and how together they wrote a book that directly addresses the topic of do animals have emotions. Wid and Michael argue that whales not only have emotions, they are also highly intelligent and have complex social lives. Henry and Tom makes you think twice about not only the immorality of killing any whale, but also the cruelty of jailing them in places like Sea World or putting dolphins on display at luxury hotels for the amusement of human guests. 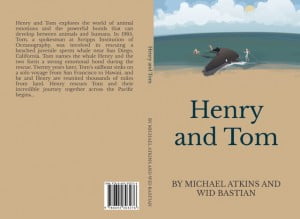 Henry and Tom is a story about a man bonding with a whale and their great adventure together across the Pacific. The other aspect of the novel that readers find compelling is the story of a successful blended family. Divorce can be brutal on kids. In Henry and Tom, loving parents do their best to put their children’s needs first. What a great example of how to do a difficult thing the right way.

For a limited time, Henry and Tom the eBook can be downloaded for only $2.99. For sure that price is good for the book’s official debut on November 28th. You can download Henry and Tom on its Amazon book page. More information and book reviews can be found at henryandtom.com.

As one Amazon reviewer put it, “Henry and Tom is an extraordinary story of love and cooperation between a man and a whale… It deals with marriage and family, life crises, finding one’s self – personal development and life in the real world in addition to the story with the whale… It’s a deep and very moving story. Beautifully written and well produced. I highly recommend it.”

Philip Kapneck: Trade Ambassador Surfs the Wave of Goodwill, Creating Jobs
How Will Florida Worker’s Compensation Insurance Rates and Coverage Be Affected in 2018?

Is There A Puzzle to…

Be Wisdom Publishing is Looking…