Activists were protesting the 2012 GAIM Conference, which sells itself as “one of the most important conferences for the hedge fund industry.” Last years attendee list of over 500 included prominent banks and investors involved in funding private prisons and home foreclosures. The current list of attendees remains a secret.

Past attendees include representatives from BP, Goldman Sachs and Bank of America. The GAIM conference schedule includes an outdoor cocktail party this evening at the Boca Resort.

The bridge blockade was an attempt to disrupt the cocktail hour and to bring public attention to the list of “corporate criminals” gathered in Boca. High on the list of concerns for the protestors are fraudulent bank foreclosures and the building of private prison & immigrant detention facilities.

Wearing “lockdown” devices, the three anti-corporate greed activists, laid down on the bridge effectively stopping rush hour traffic for an hour, between 5:00 and 6:30. Special operations police teams were called to the site to remove the lockdown devices that were linking the protestors together. The three were arrested and are expected to appear before a judge tomorrow morning at the Palm Beach County jail. 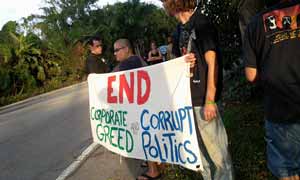 “Our lives and the environment are not a game for corporations to roll the dice and hedge their bets on. We want accountability. We want corporate funding of elections to end.”
– Kevin Young just prior to being arrested

“Every day we see corporate power destroying our communities. From environmental disasters to private prisons, corporations are operating with impunity,” said Ana Rodriguez before being arrested. “While the bank leaders drink cocktails and toast to increased profits, people across the globe are being hurt by corporate greed.”

Another protestor scaled a tree alongside the bridge and hung a large banner that read: “What Would Robin Hood Do?” The banner was taken down by a fire truck and confiscated by Boca Raton police.

Police expect protestors to return tomorrow for day three of the GAIM conference.

Do You Have the Resources for Your Child’s Education
If You Don’t Vote, Shush Up!